A totally unnecessary love-letter to books

Don't judge me for this, but I spent the last hour sitting in my summer house reading W.B. Yeats' Wanderings of Oisin. Okay, have you got all the shouts of 'posh twat!' out of your system yet? Good, then lets carry on. While I was happily glugging cider and wondering what the fuck Yeats was on about, I realised that it didn't matter, because I could flip back and forth at my leisure, without pressing rewind buttons, and having people look at me like some kind of cretin who doesn't understand that Oisin spends three hundred years dicking about in Faerie because he saw a pretty girl, while Ireland converts to Christianity behind his back and then instantly feels his age and falls off his horse on his return (saved you a read there, thank me later). 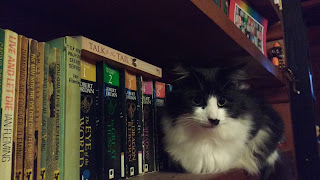 My cat, Kahlo thinks that the wheel of time was way too long, and
hopes that a song of ice and fire gets to the point soon before it goes the same way.
She quite likes Ian Fleming though, these are her books obviously,
mine are all far more worthy.

I know it's obvious, but I really like books. They are the best of all the entertainment media available. I always used to think I liked books best because they were convenient, because I couldn't watch telly or listen to records when I was stoned off my tits in the middle of the woods. But then walkmans (walkmen? I don't know) did exist back then, and I still preferred to read a book (at the same time as listening to records is best if you can though). Nowadays, you can watch telly right off your phone, so I could sit in the middle of nowhere and watch anything I like. However, I like books, so I do that instead, if I'm not staring vacantly at the view, wondering where the dog's gone and if there's another can of cider hidden in my coat.

I like the medium of reading much more than watching stuff, largely because I get easily distracted by my own brain. One stray thought and I'm off thinking down a rabbit hole of something else, and by the time I get back I have no idea what's going on. This has become a much bigger problem with age, as a kid I could be riveted to any movie easily, never once thinking 'I wonder what it would be like if you actually were a baby deer being raised by a street-wise rabbit' and coming up with a gritty alternative version that focuses on Thumper's troubled past as a child prostitute. Decent, plot-driven TV and film of the kind I like, will slap you for not paying attention. You will have to rewind, or just look bemused for an hour or so while you figure out what has happened. Luckily, there is plenty of TV that you can just watch and not need to know what's happening, or two minute videos of people falling over on youtube. I'm not a fan of those though.

The book allows you to look up, and think about what you have just read, look at the view, and contemplate things a bit before diving back in to the story. Theoretically, these days you can pause TV and movies to do the same thing, but when did you last do that? Never, obviously, nobody does that. In the same way as nobody rewinds back to the start because they've forgotten the hero's sister's name, or where the whole thing is supposed to be set. Although this could also be because we are usually watching in company, who will shout at you for pausing it and staring wistfully out of the window with thoughts of wonder over Ross Poldark's terrible scything technique. Also, if you are a mum it is perfectly acceptable to keep bombarding the rest of your family with questions about the bits you have missed/slept through/didn't understand. However we all riffle back through the pages to remind ourselves of what we supposedly already know (which is the one thing I really hate about my kindle, flicking backwards and forwards is damn near impossible). Particularly if we have made the mistake of reading half a book while utterly shitfaced, and discover we can't remember a word of it the next night, resulting in having to riffle back through half the book before finding anything recognisable (or is that just me?)

It could just be because my parents had cases and cases full of books, all pretty good ones as well, next to their utterly forgettable record collection, in an age where nobody really had video collections, and there were only 4 channels of TV that stopped at night-time. So books were the only things I could grab in my lengthy insomniac nights, and certainly the only entertainment-on-demand in existence when I was a kid. Okay, sometimes the insomnia was caused by the fact that the Secret Seven were engaged in some particularly difficult case, or that I was worried what would happen to Moley in the wild wood (are you calling me a posh twat again?) but with a torch, and some very quiet page turning, I could get back into that other world easily. Right up until my mum caught me.

There's also the joy of the stolen 5 minutes, quickly reading a chapter with a cup of tea. You can't do that with a film or a TV show, well you could, but do you know anyone who does? The fact that you commence on a book, safe in the knowledge that it will take you a lot longer than an hour or two to get through is comforting. The surprise you get when you reach the end in the first session will always lead you to believe it was a good book. Although in many cases it isn't, as a second reading will confirm. Phantom Menace syndrome* applies to books as well.

I know people that don't read for pleasure. I don't understand them at all, but I know them, they don't seem happy. I know people who can spend over a month reading one relatively slim book. I don't understand them either, but they seem a little happier, although they do watch a lot of telly. It took me two months to get through Les Miserables, but Les Miserables is enormously long, wildly tangential, and requires a good deal of backward page riffling to remember properly. Worse than that, it inspires a lot of those staring off contemplating what you've just read moments. It's hard going, but by golly it's worth it. Unlike the musical, which reduces it to a bunch of catchy songs and two-dimensional characters. That's a couple of hours of my life I'm not getting back any time soon.

Don't misunderstand me, I'm not one of those awful twats who don't own a TV (how do you possibly find out who these people are? Don't worry, they'll tell you) I have several, I spend a great deal of my life lying on sofas and watching movies. TV is great, movies are great, I can lose days just listening to records and looking at the ceiling. I'm not even arguing that books are more improving than TV is, breaking bad was a TV show, and Dan Brown is still writing very popular novels, case closed. There's a lot of shit out there in every media. 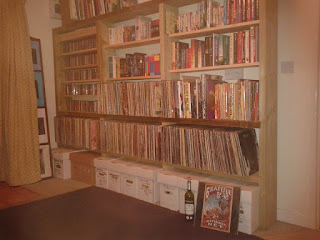 I made these for books, they got a bit filled with my records, so I built more,
they don't look as good as these though.

We bought a bigger house so it would fit all of our books in, we don't regret it. I spend a lot of my time building new shelves to fit all our books on. My wife and I buy enormous amounts of books, she prefers huge weighty non-fiction books on art and photography, which take up an entire wall of our living room, while I have filled the rest of the house with sci-fi and fantasy paperbacks, classic literature, and stuff that just looked like it might be interesting from the cover, along with the poetry collection begun by my Grandfather, that I promised I'd increase and pass on to another generation, I'm doing okay with the first bit of that, and have tremendous optimism over the second. Of course I throw a lot of them back into the world via charity shops, and occasionally leaving them on buses, but the piles get bigger, never smaller, which is great, because books are great, even the ones you never get round to reading.

I have devoted most of my life to pure escapism, sometimes via transcendental music, sometimes via hallucinogens and narcotics, sometimes via the cinema screen, sometimes via the simple, beautiful method of cider. But the only one that works best, and can take me to where I want to be, be it Ankh-Morpork, 19th century Paris, the Shire or Toad Hall, is just some bits of paper with ink on. I would not want it any other way. 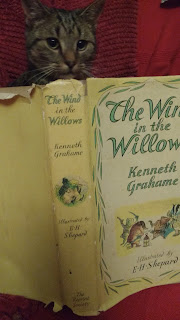 *as an impressionable 22 year old, I left Barnstaple Cinema having seen the Phantom Menace, a film I had waited more than half my life to see, convinced that it was the best film of the entire Star Wars saga.

After seeing it again, I quickly realised how wrong I was. How very, very wrong.
Posted by Dave Holwill at 12:32 No comments: