Change Is Inevitable, You Will Be Assimilated.

The most annoying thing about middle age is the creeping nostalgia, everywhere you go things scream, 'I am not like I used to be!' at you all the time. I am not from the age of steam, but most stations are, the slatted wooden roofs and victorian buildings hit you with a warm glow of Jenny Agutter-related feelings. 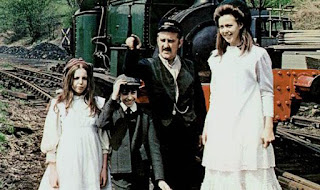 The now-sadly-locked-forever doors between platform and cafe at Exeter St Davids take me back to the days when my mother used to leave me and my siblings on the train and send us off to our grandparents. Anyone could get from street to platform and back as often as they liked without buying a ticket, or having to find a human being to help you through a broken automatic turnstile. A well-meaning parent could put you and your bags on the train before waving a tearful goodbye (probably tears of relief at getting a break from the kids) from the platform. An abandoned bag would be picked up and asked about, rather than detonated, and you could buy your ticket on the train after getting on (or try to skilfully avoid the conductor). Modern stations are now, architecturally speaking, an uneasy mix of Enid Blyton and Philip K. Dick. 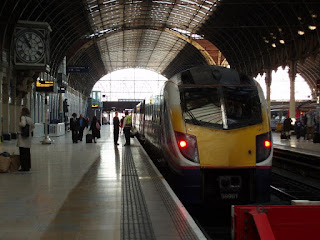 Once on a train it is now customary to make a little living room in your seat. Young girls are setting up tablets and headphones to bingewatch shows on netflix, all the while holding their phones to their faces to make sure they're getting enough insta-likes – 'On the train bingeing Ru-Paul, lol. #bigweekend #essaydue #lateron.' filter filter filter filter. Meanwhile the besuited city men continue to hammer noisily at laptops or give it the full trigger-happy TV into their mobile phones: working, working, working (perhaps).

My reaction to this is surely a sign of my age, the world keeps moving, and we can move with it, or be angry about everything until we die. I felt a pang of sadness that these kids weren't allowing themselves a bit of space, time to think. That they weren't even paying attention to the TV show they were watching, let alone where they were, being in the moment for a minute. They were no different to me, sitting reading a book (I am currently going through a phase of reading dreadfully written books with really interesting plots, or beautifully written books with no discernible plot, and one anomaly which turned out to be both) on a kindle no less. Or even the newspaper-reading bowler-hatted commuters of the golden age of steam. Ignoring everything and putting yourself into a little bubble is what being on a train is all about surely?

I remembered the days when I used to cross the country by train with an 8 pack of lager and a packet of embassy no 1. I was that drunk bloke on a train, waving a cigarette in your face and making you talk to him about whatever happened to come to mind. I met some of my best friends on trains, admittedly, I never saw them again after I got off, but for a few hours, we were best friends. I still drink on trains, but the difference now is that I buy it from the trolley – fellow passengers find this more socially acceptable (upon field testing my acceptable train drinking theory, a man gave me a scathing look as I pulled a can of Strongbow from my coat pocket, minutes before he paid for a tiny bottle of trolley wine). 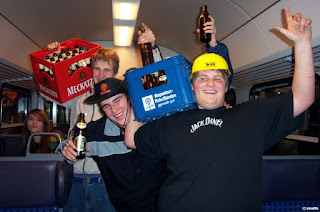 On my return (from London) I had a look at my notes. There were loads again, enough that, added to all the previous pieces I've written (this, this and this at least) I could probably make my next book non-fiction: a misanthropic yokel's guide to the capital. On the other hand, I can't keep on writing jokes about modern parents (this time they impressed me, a lady in a hijab patiently explaining the 1666 restoration of Charles II using Frozen as an analogy), ludicrous fashion trends among the young (this year it's Noddy Holder trousers and big socks) and urban runners (my favourite was an angry goose on the south bank).

Security is the new constant. The streets of London have never been more fear-inducing. More so because it probably is necessary. Armed police and crash barriers side by side with anachronistic horseguards (who are not necessary, because of the armed police and crash barriers). Add this to the fact that everyone you walk past has an earpiece and is talking to themselves down their sleeves, so therefore must be a secret agent, and you could be living in an Orwellian dystopia of your own making. The city itself is the same stark contrast as the station, shining glass and steel alongside iconic historical edifices – Bladerunner writ large atop Fagin, Scrooge and Pickwick. 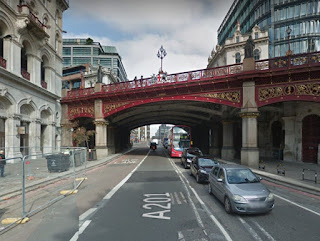 We are treated like idiots now, from the locked station cafe doors to the 'Caution Extremely Hot Water' signs above the tepid stream of public toilet handwashing water. Large public tactile art installations rendered impotent by cordons, every stair covered in high-vis yellow and black tape, and warnings on tube platforms about dropping your phone on the line. Like most of the modern world, it is beyond satire.

The first ten years of the millennium saw change beyond belief. When 2000 dawned, there were a handful of us hanging out in forums and text-based chatrooms online, still seen as weirdos, I had a CD walkman and a coat full of paperbacks for long journeys, and wrote notes in a notebook in my pocket (when I hadn't lost it). By the end of the decade everybody was sharing pictures of their breakfast via smartphones, I was reading books on a kindle (same one I still have), making notes on my phone (truly a godsend since any pen left in my pocket will make a break for it within an hour, and my notebooks all ended up in illegible scrawls) and could fit my whole record collection on a box in my pocket (again, the same one I still have). All the changes since then have felt like tinkering around the edges, bigger phones, smaller phones, slightly more intuitive interfaces, whizzier graphics. This could be just because I got old. I was in my twenties when it all began so I paid attention. Do please prove me wrong. 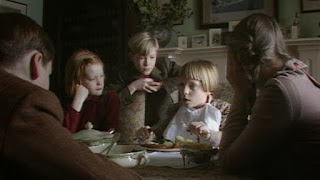 It makes people yearn for the past, for a simpler age – as change always has done. The hipsters returning to print books, vinyl records, and waxed moustaches are no different from the pre-Raphaelites trying to return to what they saw as a golden age of art. Going back is both impossible and ultimately undesirable. Fictional versions of the days between the wars, travelling on steam trains and listening to Jazz are very different from the realities of polio, tuberculosis, manual labour without health and safety and dying in childbirth. Besides, if you did it properly, you wouldn't be able to snapchat it, so what's the point? 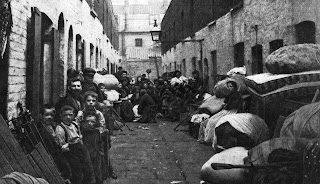 
The London I have just visited, and the trains I travelled on are completely unrecognisable from those of my youth. It's not a bad thing, and the world moves on. Eventually it will become so unfamiliar to our eyes that we do not want to see it anymore. It's always been this way, and prepares us so that when we finally have to leave this world, we are glad to wave goodbye to a place we no longer recognise.
Posted by Dave Holwill at 12:40 No comments: