I Miss The Lockdown.

There, I said it, and I know ‘but the economy’ and ‘people can’t stay in the house forever’ but Roy Roy Wood wished it could be Christmas every day and people are alright with that.

Sorry I haven’t posted since May when I moaned about how awful the endless online lockdown challenges were. Turns out they were just a harmless bit of fun and I did the album one again (do comment below if you want me to post it, it was unflinchingly honest on the third go round), but it’s been a weird few months and the only things worth writing about were all covid/lockdown-related and covered elsewhere. So I concentrated on writing the two books I had always planned to write this year. They were going really well up until the world re-opened and the existential dread kicked back in.

In fact I was being more and more productive right up until Taylor Swift released Folklore; since then I’ve spent all my free time listening to it in the garden drinking cider.

It’s been weird though, hasn’t it? It seems a thousand years since I published The Ballad Of Fat Labrador, and yet it was only February.

Just before everything changed and I forgot how to promote my books. 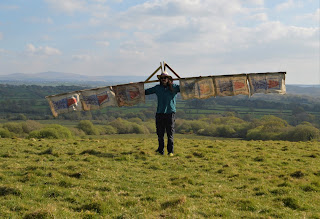 Here’s me as the Angel Of The North

At the end of last year I wrote about how difficult it is for adult men to maintain genuine, healthy friendships so a couple of weeks later I started going to the open mic night in my local pub. It was fun, I was meeting new people, people I actually have something in common with - which is a pretty rare thing when you live in the arse-end of nowhere. I only started going to use it as a testing ground for my new solo act - singing the cheesiest of cheesy pop songs with a completely straight face - but quickly found it to be the community I’d been looking for. There’s none of the bitchy snark I remember from the open mic nights I went to in the 90s, and I’ve found myself in at least one teary sing-along when the brilliant Anthony Lane unexpectedly sang my favourite Gerry Rafferty song ever - ‘The Ark’.

It was good for me, making myself go out and talk to people. But on the night of the last one in March, I was self-isolating at home from work with a slight case of the sniffles, so the Heart song I’d been rehearsing ended up on Youtube instead.
The special effects are not that special

I had a go at the virtual gig thing and while I managed to pull in the biggest audience of my solo career on a Facebook live performance, I didn’t like it. I missed the community, I missed standing outside a pub waving a cigarette at a stranger while attempting to explain why Miley Cyrus is the greatest rock vocalist of the 21st Century. So I didn’t do it again. I carried on putting edited videos on Youtube, but attempting to engage with an audience I can’t see from my kitchen is not for me.

I am missing the live experience terribly so if you are thinking of getting me to play guitar in your band, right now is the time to ask, I am pretty much certain to say yes.

Messing about with synths and banjos in my studio again (since I wasn’t having to learn any new material for bands or dep gigs) meant I ended up being a small part of the Manroom Sessions Isolation project with a bunch of guys I’ve known and played with for years. There were a lot of leftover bits once we were done and as a result I’ve put together the first new Plastic Squirrel material in five years (and filled it up with some stuff I found on a 23 year old tape).

All that aside, April was possibly the happiest I’ve ever been. There were no expectations to go out, no obligations to live up to. I was (very lucky to be) working reduced hours at my day job, with no deadlines or expectations. The weather was lovely, and the actual business end of the pandemic was (and still is) a long way away from where I live - on the edge of a moor with a decent-sized garden. I feel guilty that I enjoyed it so much, but I managed to hit my self-imposed writing targets every single day, with time to sit back and relax.

At least that’s the way I remember it now - months after the fact. I do recall one afternoon where I came back, and let the full enormity of what was happening sink in. I opened a beer, rolled a cigarette and sat on my own in the garden, no music on (there was no point before Taylor Swift released Folklore), no book, no tv, no internet. No company to distract me. It was maybe a week and a half into the lockdown and I’d been too busy dealing with the practicalities of going to work to think about the implications of a global pandemic. I remember I really freaked out. After that I made sure I took time to think, breath and relax every day. I’d had no idea it made me so anxious until then.

Now things are getting back to normal, all the old, familiar, anxieties are back to replace that creeping sense of covid dread. I miss the spring, when it felt like all humanity was taking a deep breath and we were all going to come back stronger, better, more together and united (and able to knit, run 10k, play new instruments, paint masterpieces etc. etc.) It was like all the little right-left divisions stopped being important for a moment and we really were all one people who could get through this together.

Then an awful self-entitled dickhead refused to say sorry for driving to Durham and everything went crashing back to the same level of bickering and dreadful that it was before.

And there was so much hope.

I thought my friend and former Cosmic Jug bandmate Ian summed up the feeling of that weird time perfectly with this song - Grow Bag. It’s very lovely and you should take the time to listen.