Ho ho ho, tis the season to be stressed out, screaming and utterly devoid of ideas for exciting and thoughtful gifts. Why not buy your loved ones some completely useless shite that they will never use? It will keep me in a job, and the country will thank you for contributing to the economy. (I don't mention it much, but I do work in the useless-personalised-gift-that-your-uncle-who-you-hate-buys-you-for-christmas-and-that-you-immediately-throw-away industry. Sorry, please don't hate me.)

I have just finished getting myself into the festive spirit with an early Christmas movie, Jingle All The Way a masterwork of acting genius from a Terminator T-800 and a young Darth Vader. I don't know if such a plot will ever have relevance again, surely if it were made now, every parent would immediately have pre-ordered a Turbo Man doll on amazon, and Sinbad off of the Cosby Show would have probably nicked one for his kid while out on his post round, saving all that shopping hilarity from ever happening. A 2016 Jingle All The Way would probably feature those smug, laughing shop workers crying into their unemployment benefits as they are replaced by electronic drone delivery. 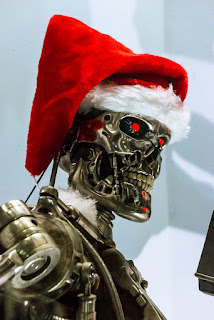 Actual Still from Jingle all the Way

The trouble is, that my personal favourite standby for last minute presents – DVD boxsets, CDs etc – are now being rendered completely obsolete by Netflix, Spotify, Apple Music, good-old-fashioned online piracy and a sea change in the way we consume media. I for one am quite happy to give up on the idea of gift-giving entirely and just have a nice day with my loved ones getting pissed and eating food. This is why I prefer New Year to Christmas.

Personalised tat is seriously big business now (for two months of the year) because the only way to show somebody you care in the 21st century is to spend all the money you earned having to work extra hours in the run up to Christmas (which seems like a lot, because you only get 2 hours a week on your zero hours minimum – not fucking living, calling it a living wage doesn't make it one you tory bastards – wage contract the rest of the year) on a Macaroni and lentil portrait of them from some smarmy fucking art student on Etsy. 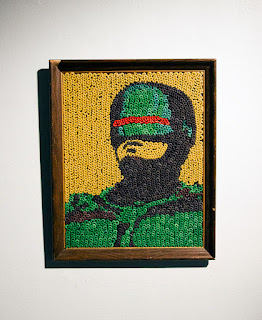 This one is ok actually

I fear for the future, I fear that soon my stepchildren will reproduce, and I will join the legions of people who receive a calendar of ugly baby pictures every year, and are forced to display it proudly in the house for all to see. I like to think that when that Christmas day comes I will either feel differently about shitty personalised calendars when they're my own grandkids, or have the kind of relationship with the kids that will enable me to say proudly, “Take this fucking crap back, and buy me some biscuits you ungrateful wankers.”

Of course, the genius of marketing personalised gifts to all and sundry ensures the survival of capitalism as a concept (It is often explained that without the yearly phenomenon of Christmas over-indulgence, the economy would collapse to nothing, the company I work for would certainly collapse without the boost we get in December from twats with too much money buying useless shit for other twats.) as you can't just re-wrap it and pass it on to some other poor sap a year later. Of course, I have never ever rewrapped a shit present from somebody and passed it on to somebody else. Honest, never, I certainly haven't ever been caught out by giving it back to the same person who gave it to me, ever, right? However, we anti-capitalist anarchist types could start bringing the state to its knees by not buying each other new shiny things (or experiences, hot air balloon rides and wine tasting are just as show off and wanky as a golden bog seat) once a year, and just passing the same crap round and round between us (bottles of Grappa and Olde Englishe Cyder are a good gift for this kind of game, nobody is ever brave enough to open it (apologies for throwing in a private joke there)).

So throw off your Grinchy Faces, buy everybody charitable donations to something you actually give a shit about (or a copy of my book – you didn't think I was going to write something about Christmas shopping without throwing a little plug in did you?) or go to local places and get people something they might actually enjoy – cheese, booze, stuff that won't clutter the place up and they won't have to dig out of the cupboard and proudly display as if they love it more than life itself every fucking time you go round to see them. Ask them if they're having trouble with anything, make your own vet vouchers for people with expensive pet problems*, garage vouchers for people with old cars that constantly break down (yeah, I know it's just cash, but people spend so much on other people at Christmas they screw their own finances up in a total reversal of sense) they will appreciate it more. I hope.

Of course, I'm probably wrong, and you actually do all want a 3 foot high bamboo cat that holds two non-standard sized bottles of wine while simultaneously removing the last few square feet of empty real estate from your dining room, so go ahead, do what you want. 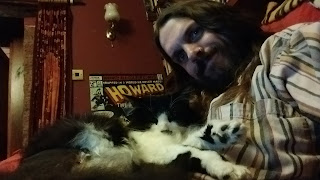 Me and Bitey wish you a stress free shopping experience


*this is not a plea for money in any way, but in a follow up to my last blog about my cat, those of you who are interested might like to know that after a lot of vet visits we finally ascertained that her kneecap had become detached. There was an operation offered to us that would cost nearly £3000 and probably wouldn't work, we declined and have had her back leg amputated instead for a lot less. She is doing well, and might be allowed outside again soon, not soon enough in her opinion, which is how I know she's alright. The dog is ok again now as well after her utterly disgusting skin infection next to her ear, the fur is growing back on her face and everything. The vets (who I may have mentioned before are utterly brilliant) have sorted us out with an account to ensure we can pay for it all easily, and all is fine and dandy. Please ignore all of this if you don't give a flying fuck about my pets, like most people, especially the wanker that hit her with a car and detached her kneecap (incidentally, if you're reading this, please leave the vet expenses money in a brown envelope in the egg money box, thanks).
Posted by Dave Holwill at 13:10 No comments: