Why is it so hard for me to admit I don't know things?

The worst advice my father ever gave me was: 'If you don't know the answer, make something up and say it authoritatively enough that nobody questions you.' I think he meant it as a joke, but one of my friends once told me that while I would undoubtedly be useful as a phone a friend on Who Wants to be a Millionaire he would never use me because he would 100% believe my made-up bullshitty answer. I can't blame him.

This, conscious or unconscious, self-assured bullshitting is rife, in a certain kind of person. I recently ran into a vague acquaintance in the street (late 60s, well-off, male, white) who asked me about my dog. He said:

'Is that a Husky?' (I get that a lot) and before I'd had time to get my answer out, he added, 'it's definitely got some Husky in it though, am I right?'

I quickly interjected, 'No, she's an Alaskan Malamute.'

At which the chap said, 'Oh yes, I’ve seen them before, they've definitely got Husky in them, yes.' Before going on to criticise the anti-Brexit demonstration that was happening across the road, telling me he was going to go and explain democracy to them. 'We had a vote already, they lost.' At this point, I started to think I was being mansplained to. Clearly I know more about my dog than this person who has just met her. But I am also a man – albeit a fairly girly one. Perhaps, given his ruddy complexion, I was being hamsplained to? 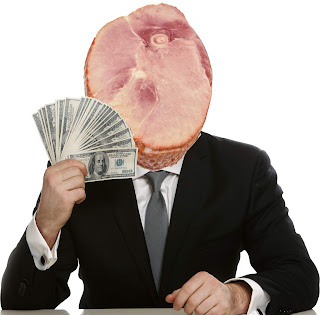 I politely smiled and made my excuses to leave. There are some people I have no time to argue with, not even to explain the Alaskan Malamute is a separate breed to the Husky - well known for its pig-headed stubbornness - and actually much older, so if anything the far-better-known Husky has probably got some Malamute in it. And I am so tired of arguing about illegal votes carried out on misleading information I now have an 'agree with both sides' policy in public.

Old-fashioned British privilege is still alive and well as evidenced by the dramatic drop in kids studying languages at school on the news the other week. Everybody speaks English right? ‘Dos Cervezas por favor Manuel’ is all the foreign any of us need to know, and not even that, you can point at the San Miguel pump and wave your fingers at the barman. Though it is more fun to sing Dos Cervezas por favor to the tune of Queen’s ‘Las Palabras De Amor’ at any given opportunity. Couple this alongside the bluster and bluff of many of us refusing to admit we're wrong and you can see what led to a lot of the problems with the world today. The much-criticised White Male Privilege, and the toxic masculinity that surrounds it. It's not easy being ham. Although, in fact, it quite clearly is easy, but you could be forgiven for thinking it wasn't given how much of the stuff we chaps take for granted as god-given rights needs to be split up, broken down and just chucked in the bin.

I'm guilty of it myself, as I said earlier, my dad told me to do it. It's the attitude that still leads me, when asked if I've heard a new band, to declare that I either love or hate them, based on an immediate judgement of their name, or, in best-case scenario, say 'I think I know the name,' rather than admit I haven't got a fucking clue who they are. I am gammon, hear me boil.


Conversely, I have plenty of friends who are happy to admit gaps in their knowledge. Not many of them went to the same public school I did though. Most of them are nice, normal, working class people, the type I work with. I tell them things, and they listen, and believe whatever I tell them, because I am a bit posher, and therefore must be deferred to. This might be an oversimplification of a complex situation, but I've noticed it over the years. My accent gives me undeserved gravitas. I have been known to use this power for evil, filling people's heads with misinformation and lies. 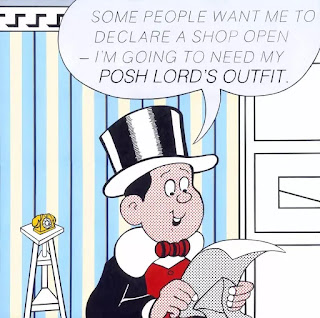 People of the UK, we have a class problem. You knew that already though, right?
I noticed it quite prominently at breakfast in a Premier Inn last month. The seemingly random way those coming down for food were placed at empty tables slowly began to take on a pattern. The nice bit, over by the windows, with large tables, nicely spaced out, was filled with elderly couples – men in pink trousers explaining the correct way to boil eggs to women with massive handmade scarves – whereas the very close together tables near the coffee machines were populated with tracksuits, phone-starers and feral children. On my second morning there I began to think I should get a nice haircut and put a suit on to enjoy my breakfast in peace - because, at heart, I am a fucking snob, alright?


This isn’t just going on at discount all-you-can-eat breakfasts. It's pervasive and it always has been. The culture we consume is filled with a certain kind of person from a certain kind of background who is very good at lying when they don’t know the answer.


Books, in particular, when they get a female lead, seem to have a certain kind of protagonist. They tend to be either quiet, bookish, well-educated and just moved to Bloomsbury to become an editor, or feisty, take-no-prisoners redheads, who have just left Bloomsbury to start a new life away from the getting-bummed-against-some-bins (© Caitlin Moran) trauma of their past life as an editor. The very upper-class are presented as incestuous murderers, megalomaniacal wealth hoarders, or Bertie Wooster comic foils, while the working class (or God forbid, the unemployed) are either murder victims, slags, or against-all-odds butterflies who shrugged off their terrible upbringing (probably being motivationally bummed-against-some-bins (still © Caitlin Moran)) to join the hallowed middle classes (and become an editor with a flat in Bloomsbury). 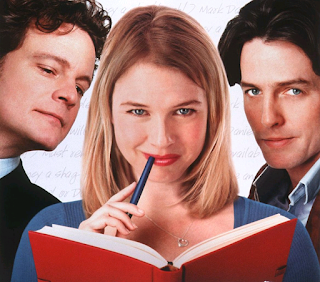 We're too soon into a post #MeToo world to see the knock-on effect in fiction (publishing timelines are unavoidably long)* but I suspect, if anything, it will lead to yet more feisty middle-class girls from Hampshire being motivationally bummed in cute knitted hats. I realise that the reason for the nice, quiet, bookish, middle-class girl heroine is because more books are bought and read by nice, quiet, bookish middle-class girls than any other group (I have no evidence other than my Twitter timeline for this outlandish claim). Representation is nice, it is good to see yourself in the stories you read. But, and just think about this, what if the reason the working-class council estate kids aren't reading books is because all available books portray them either stabbing, being stabbed, breaking up marriages in grubby, doomed affairs with the handsome but flawed husband, or being aided by the middle-class saviour to become another fucking media twat.


Is there a place for a story of a kid from a working class home, on a council estate, who doesn't actually see anything wrong with where he or she's from and isn't yearning to escape? Girls who can go on to do something important without being non-consensually bummed into it?


We have a problem with the working class in this country, mostly that we are eroding low-skilled employment to nothing and ensuring the creative industries don't pay enough at entry level to be anything other than a hobby for the already well off. If this continues we will never see anything other than the same old tired literary fantasies of 'University Lecturer works out his mid-life crisis by fucking a mentally unstable student,' and its mirror 'Woman who was abused by her college professor goes through emotional turmoil before finding new love with a younger, slightly less-rapey University Lecturer.'


*correction - I’m too far behind in my reading of new releases to have any idea if this statement is true, please correct me, I want to be wrong.