A Few Things I Have Learned Over Four Decades Of Singing In Public For Money.

Once upon a time in the relatively recent past, they made a movie in which you not only had to believe that Gwyneth Paltrow was Huey Lewis's, naïve, angelic, virginal, Las Vegas Showgirl daughter, but that Huey himself made his living as a karaoke hustler. That's right, a karaoke hustler. I don't think that's ever been a real thing but I would like it to be. Duets is a movie with many faults, but Paul Giamatti's performance remains the single greatest portrayal of midlife crisis/breakdown ever. Michael Douglas in Falling Down and Kevin Spacey in American Beauty are hailed as benchmarks, but they lack the heart. They lack that spark of crazy that Giamatti brings to 'popping out for some cigarettes', and neither of them ever made me cry singing 'Try a Little Tenderness'.

The sheer joy of singing at full volume to a room full of strangers cannot really be represented in a batshit crazy movie that represents Karaoke as a viable career option, but it does a good job. Music soothes even the savage beast, supposedly, and has an unreasonable effect on our moods. I maintain that anybody can sing, given enough time and practice. Certainly well enough to sing in a choir, do karaoke or impress their friends. The trouble begins when easily-impressed friends suggest that those of average ability should do it professionally. It does, admittedly, lead to the only bits of X-Factor worth watching, but also to some of the most excruciating pub bands I have ever had the misfortune to watch (and occasionally find myself depping for). Luckily I'm too polite to tell those who are willing to pay me money for my musical services that my dog's angry requests for a walk are more tuneful then them.

Singing is not black magic, but you need to spend a hell of a lot of time doing it with no sense of dignity or shame in order to be able to hold your own. If you hold back for fear of being laughed at, you will suck; if you give a shit what other people think of your voice, you will suck; if you are not using every single part of your being to project the very essence of the song out into the world, then you will suck. Even if you are doing all of this, you will probably still suck – join a choir or an am-dram group instead, there is strength in numbers. I have, at best, an average voice, but ever since I was twelve and every band I put together failed to find a singer, I have been resigned to having to do it. Having grown up singing in both church and school choirs (once at a big posh do in Exeter Cathedral, and once on the telly), I was the default best-of-a-bad-lot choice for frontman.

I was about sixteen, a little drunk at a family party and singing AC/DC's Crabsody in Blue when I received the review that gave me hope. My big sister turned round to me and said, 'shit, that was actually quite good.' It has stuck with me forever, and any time I am worried that I might not be able to pull a gig off, I remember. My sister is not one for unnecessary compliments (she also once mistook a Led Zeppelin record for me practising, I took her shout of 'Turn your fucking guitar down!' as high praise).

It's no different from learning any other instrument. I gave up piano lessons when I was about 8, and took up guitar a few years later. I spent every minute I could between the ages of 11 and 20-something with a guitar in my hand, playing, playing and playing it some more and am now good enough to play without really thinking about it. Whereas, I am currently re-learning how to play the piano properly and it is hard going thinking about the mechanics of what my hands are doing and what notes I want to play. Because I am old now, and it is less intuitive. In the same way, those singers I am lucky enough to work with that have been singing in front of bands for as long as they can remember are – for the most part – fucking heavenly. Whilst those who hit mid-life crisis and decided to give it a punt because they always wanted to try it are – at best – pretty good, you know, considering, etc etc. Like most things, if you leave it too late, you will never be great. Just accept it.

I am unreasonably critical of other singers, because I cannot understand how, if a song is inside your range (mine is incredibly limited – but I know what notes I can and can't hit) and you've got an instrument to pitch to, you can still manage to not be in tune. I understand that years of angry choir masters rapping my knuckles with rulers refined my tuning, as has the last more than thirty years of singing in public, and that my knackered right ear is now a permanent monitor allowing me to hear my own voice in my head above everything else. And that I lack empathy for others. Maybe somewhere in there is the difference between the fan/karaoke/choir singer and someone with the brass cojones to stand at the front and tell the rest of the band what to do? 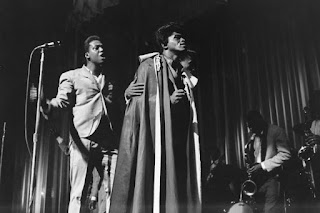 You Have To Earn The Fucking Cape
Pay Your Dues

Posted by Dave Holwill at 08:35 No comments: