Election 2017 – Sometimes it's just nice to be asked 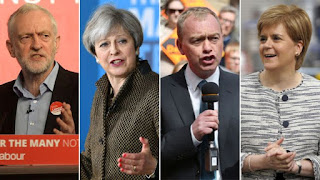 The dust has settled on the general election, and it is clear that absolutely nobody has got what they wanted out of it. There's a lot not to like about the whole thing, despite the sense of hope it engendered in those of us who lean a little bit left. Make no mistake, this election was not about Brexit. It was about disenfranchised angry young people who finally had something to vote for, giving hope to a generation beaten down by being told 'Labour can't possibly win here, vote tactically' by another generation frightened of losing their houses and identity. It is with great sadness that I see the politically engaged youth painted as greedy students responding to bribery by the right. The bribery of cutting inheritance tax for wealthy, triple-locked pensioners with guaranteed winter fuel allowance in past manifestos was absolutely fine though.

The rise of UKIP, and the surprise Tory majority in the 2015 election (because Cameron promised a referendum) were down to people wanting to be asked about Europe – they weren't all that bothered either way generally (bar the frothing masses at the extreme ends) but successive governments refusing a referendum meant that the people felt they weren't being listened to. Now they have been, and it's been settled that we're off out of Europe (however massive a disaster I think it might be. Can somebody please provide me with examples of real world, tangible benefits that it will bring, other than some vague bollocks about sovereignty, imagined amounts of saved money and xenophobic posturing about immigration? Oh shit, I'm a frothing mass aren't I?) most of the electorate assume that bit is done and dusted and no longer an issue. So they voted for policies other than Europe for once. A great deal of them felt that the Labour manifesto had the domestic policies they wanted, not enough obviously, but then a great deal of them have spent their lives being told by their parents that a progressive socialist program of reform can't work here. Maybe they will be a little bolder next time. 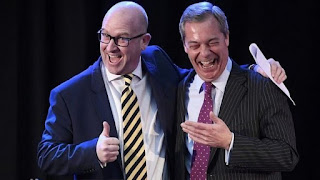 One happy side effect of all of this is that UKIP have been made redundant.
Fuck off now you irrelevant pair of dickheads

The Scottish drift back toward the Tories and Labour from the SNP implies a negativity towards a second Independence referendum. Rather cementing my view that the last SNP landslide there was more about their progressive manifesto than independence, after all, it was straight off the back of a resounding vote to stay in the UK, and there was no other viable party with a left-leaning agenda at the time. Similarly the reduced Plaid Cymru vote may have been down to having a genuine left alternative that wasn't covert nationalism at last. Or their commitment, alongside the Greens, to a progressive coalition – openly inviting tactical voting for other parties.

The Liberal Democrats have now received their second spanking for the sins of the coalition, although Tim 'who?' Farron is not half the charismatic leader 'I agree with' Nick Clegg was, and that's saying something. On the other hand, their previous manifestos being more progressive than Labour's may have been what attracted their earlier higher vote shares. I personally think that a viable leftist manifesto being proposed – along with the belief that voting tactically for Lib Dems no longer works – changed the landscape completely. The confusing joy from Labour supporters at losing was more down to the excitement of being able to vote for the party you have always wanted to support, knowing it is for a manifesto you believe in and not having to tactically vote for a slightly less bastardy shower of twats. 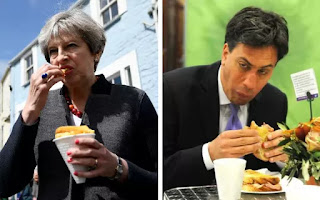 Of course we still have a completely incompetent, unwilling, Tory government. I can't help thinking that Theresa May called the whole thing, and ran the shoddiest campaign since Ed Milliband ate a bacon sandwich on a gravestone, in order to try and get out of having to do the Brexit negotiations – like my kids used to do with the washing up. Instead she's made her position laughable, and at time of writing is hoping to have her position propped up by homophobic, anti-abortionist creationists. Imagine if Labour had proposed a coalition with Sinn Féin actually taking up their seats for once? All hell would break loose.

Here's my cousin's, actually very sensible, plan for the future. It's not often I agree with him, but here it is.

He's right, I don't like it, but pragmatically, it makes sense for the utter fucking shambles that the referendum, and Theresa May's handling of the fall out from it, have caused. Thus, it gets my support, and before you go all Remoanery over it, I believe he was a Leave voter last year.

There's a lot of people working excessively long hours, while a lot of other people can't get the hours they need to live on. I don't wish to boil this down to a simplistic solution, but it is right there in front of you. Education for all, in a pragmatic way for all abilities, free at the point of use right up to degree level could solve a lot of these problems. Yes, this is a more complicated issue than I have just suggested, but it's a conversation worth having. Keynes, and Tomorrow's World, predicted that we'd all be working a lot less and having more leisure time by now. Universal basic income is another nice idea you can throw in to the mix here. The maths is complicated, but the savings on sniffing out fraud, and all the paperwork for claim-checking might be a start for the budget. Clock-punching culture in made up jobs to create never-ending economic growth for 'hard-working' families is not healthy.

These long working hours (see it wasn't a totally unnecessary tangent) also make voting on a Thursday between 7am and 10pm a bit harder than it needs to be. Do it over a weekend, two days, compulsory attendance – spoiled ballots okay – and everyone can probably make it. Hell, make it a public holiday, people will be more than happy to drag themselves to the polls for a day off work. The 68.7% turnout this year may be higher than usual, but wouldn't 100% be better? Not for those trying to keep the Status Quo I suspect, otherwise there would have been more than a few nods and an apathetic referendum for a slightly less shit AV voting system given towards electoral reform.

Whatever the next year or two bring, it is clear now that something needs to change, and there's a real appetite for it once more. Thank you millenials, you are giving hope to Generation X, and we're a bunch of miserable nihilists that needed it. Here's to the next election (probably not too far away). 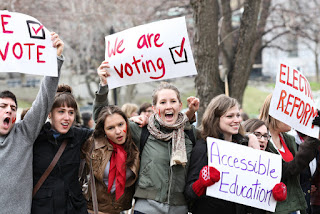 Posted by Dave Holwill at 08:49 No comments: