Looks like I picked the wrong week to publish a book

Clip for those who didn't get the reference
(Hooray! A joke I have to explain)

To clarify, I don't mean in terms of the response I have had – which has been overwhelmingly lovely, thank you all. But having randomly picked a day and decided to use it as my publishing date, I then discovered that it was in the midst of one of the busiest weeks I have had in absolutely ages. The plan was to do a massive build up (on my new website www.daveholwill.com – which finally went live yesterday after a myriad of technical problems) with a whole load of blog posts like this one – on the subject of publishing, writing, and how utterly fucking exhausting the whole process is – culminating in a massive 'Hooray! I am proud to announce that you can now buy my book!' blog post.

Which should have been ready to go last Thursday (August the 11th , in case this takes me even longer to write than I am anticipating) when I officially published it.

But what with rehearsing with three different bands, doing a quick reunion gig with my old acoustic duo, getting a new dog, remembering that I like spending time with my wife, almost forgetting a dep gig I agreed to do months ago and still having to go to work for most of the day – absolutely none of this has happened. Sorry. Also, I have no idea how to do a delayed publication thing, and it was technically available last Sunday night, but these days you're meant to do a big build up thing, so I lied to try and make it look like I knew what I was doing (I do not know what I am doing). 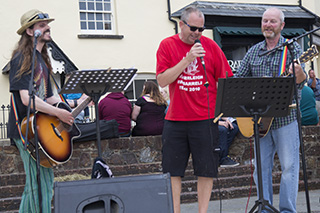 Here's one of those gigs, where we finally managed to be Rob, Dave and Eddie
(Rubbish joke courtesy of Rob Love and 70s kids TV)
(photo courtesy of hatherleigh.net by Geoff Hodgkinson)

So it was in the final throes of exhaustion that I completed the final leg of this journey (please shoot me, I told you I was tired, I had no idea I was tired enough to call something a journey like I was on the X-Factor or something – what a twat) with nothing more than a quick link thrown up on Facebook as I stood – bleary eyed and knackered in my studio at quarter to seven in the morning before I went to work – desperately learning songs for that dep gig I'd forgotten about; because I had no free evenings to learn stuff in.

To return to the beginning, those of you with very long memories will recall that 2 and a half years ago I started this blog in order to shame myself into finishing the book I was writing. Some of you may even have been reading when I posted this a year and a bit ago – thinking I had finished. I had no idea of just how much work was going to go into editing, rewriting and just formatting the bloody thing to get it out there. My Auntie Jenny has been completely invaluable as she helped me through the whole thing, scribbling all over my first draft and answering all my very boring whiny emails, I am not sure how I am going to repay her kindness, nothing could match it.

Every time I have thought it is ready to go, something else has happened: first I re-read it at Christmas, with a view to January publication, but realised that the opening was duller than a pile of very dull stones that have had all the shine taken off of them with a special de-shiner (just like my friend Deb had told me after she didn't manage to read past chapter one – though being a stubborn twat it took me months to realise she was right), and had to rewrite and hack up a huge chunk of it. Then I decided to do a course in proof-reading and grammar that meant I spent the next three months dicking about with punctuation and stuff. In fact, every time I thought I was finally finished, I did another Unit on the course and discovered another, better way of doing things – or I thought of another thing I wanted to change, and then had to check all the way through for continuity again.

But finally, it was ready, I had no more excuses and so I went for it, and put it out there for the world – which brought out a whole new load of problems. For one thing, I will admit to not being entirely comfortable with self-publishing (not just because it feels like failure) I know next to nothing about marketing, and have never been very good at putting myself forward. I occasionally claim that I have chosen to self-publish in order to own all my own rights, retain control of my work, and all the usual flannelly bullshit, but the truth is that I got bored of getting my manuscript rejected left, right and centre by agents and publishers alike (that really does feel like failure, I don't recommend it). Self-publishing is no longer the preserve of the wealthy, gullible, vain and too stupid to admit their book is horse-shit; thanks to having sold my soul to Amazon – feel free to ask me how I justify that choice in the pub sometime – anyone (that's where the problem with it all lies of course) can get a book out there without having a garage filled with unsellable, poorly typeset, folded-in-half-and-stapled-together-in-the-wrong-place A4 printouts, masquerading as books.

I will admit to being wildly impressed by how good the proof copy I was sent looked. I have not seen the version that they are sending to customers, but nobody has laughed at it yet, so I am assuming that thanks to Createspace, I have published a book, with no outlay, and over which I have absolute creative control. True, I don't have the sense of validation that a genuine publishing deal would have given me, but as time moves on, I am caring less and less about that – and feeling less of a failure; my subject matter is a bit niche, and traditional publishers don't like uncertainties anymore.

Of course, in the days leading up to my release date, I discovered the problem with not having that sense of validation – crippling self-doubt in the face of overwhelming support. The curse of self-publishing appears to be that I only have the opinion of myself, and a few close friends, that what I have written is any good (and they may have been lying). I'm not sure which prospect was the most terrifying to me on the day people started buying it: 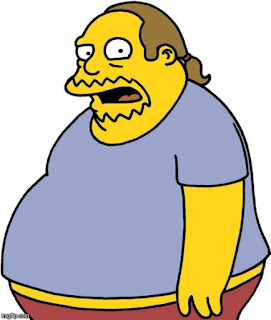 Everybody had told me they expected it to be great, I was terrified their expectations were too high and they would all be disappointed – after all, even I acknowledge that the whole thing was just to see if I could write my way through a whole book. It was a huge learning curve that turned out better than expected (in my opinion, I've been too close to George and the band for the last few years to view them objectively anymore). But, like Malcolm says in Chapter 15, 'bear in mind, this is a little piece of your soul that you've probably spent months, maybe even years struggling with until it's the best it can possibly be' what does happen if it's shit? I've spent years putting music on the internet that nobody listens to, and that takes minutes to listen to and costs nothing, this takes time to read and costs money, why on earth should anyone bother?

And then it happened, as I sat, trying not to continuously refresh the statistics page (I am limiting myself to checking it once a day, it is surprisingly difficult and I understand how people get addicted to 'likes' and retweets now), people started buying it, people I had never met told me they really enjoyed it, so far I have sold 10 times more than I ever expected to sell in its whole lifetime (I did have incredibly low expectations, so I am not retiring any time soon, but I might actually get my round in for once). The support I have had from both friends and strangers in the last week has had me wildly over emotional on too many occasions to remember. Did I mention I spend a lot of time crying these days? Well I do, and mostly because all you guys out there are just so bloomin' lovely. Thank you all so much, and if you haven't yet, then buy my fucking book – it is good, I have been validated without the corporate monoliths (alright, maybe one helped a bit) needing to step in – god bless you modern technology. 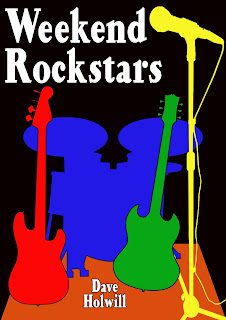 If you have read Weekend Rockstars and enjoyed it – please review it on goodreads or amazon, if you didn't enjoy it, then forget you ever saw this, thanks.
Posted by Dave Holwill at 10:30 No comments: