As a heterosexual, white, cis-gendered, public school educated bloke it is a difficult thing to write progressive and, dare I say it, feminist literature in the 21st century without being called a patronising wanker. Nevertheless, I try – because I am a patronising wanker. There are a million excuses of history and upbringing and conditioning that #allmen can use to try and get out of behaving like total bastards, and, if I'm totally honest, it takes serious effort to break your programming and not be a default mansplaining, bum-groping, calm-down-dearing cunt of a man.

This is absolutely no excuse to be one though.

Not even to use a historic female genitalia based insult to make a point.

I still did though. 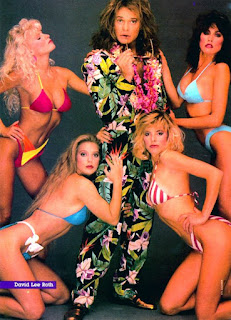 There's really no good excuse to use pictures of Dave Lee Roth
and a load of girls in bikinis either, but I thought it would illustrate the kind of thing
I thought was cool when I was twelve.
Which is kind of where the problems start right?

I am not writing to excuse the behaviour of Weinstein, Spacey, Fallon, Green and all the other blokes being rightfully called out for their behaviour. I am not even trying to do a #notallmen type right-on liberal mansplain. But since all this misogyny went centre stage I've been thinking a lot, about my own behaviour, about the behaviour of people I know, my family, my friends, my colleagues. And whether it is more to do with society than being an actual twat. And if I too am awful, or if we're all just twats. #NotAllTwats.

Before all of this began, I was (and still am) up to my ears writing my third novel, which I think of as an exploration of modern gender identities, a look at what it is to be a man – with all the historic baggage that goes with it – interacting with LGBTQ characters and modern women in the 21st century, told through the eyes of a teenager and his dad. Anybody actually reading it will almost certainly think of it as a string of dirty jokes, some comic deaths and a disappointing conclusion (am fixing that though), but underneath all the bollocks there is a study of how to wield a pair in modern Britain.

I may have mentioned that I am a heterosexual, white, cis-gendered, public school educated bloke once or twice. Yet I have still been a victim of misogyny. Not in any way as seriously as genuine victims, the closest I came to being assaulted was when a bloke bought me a rum and coke and then shoved his tongue down my throat. Had I been that way inclined I probably wouldn't have minded, I was more surprised than upset if I recall correctly, but we're not all so hedonistic and other people would be traumatised by it (a fact that Julia Hartley-Brewer seems incapable of understanding). However, as a skinny geeky kid with no interest in sports, an inexplicable obsession with his sister's doll house (which I am still thoroughly envious of to this day, it had more rooms than Castle Greyskull, and a garage) who preferred to hang out with girls, I was called a few choice names and beaten up in the changing rooms enough. As a long-haired man with a penchant for dressing flamboyantly (and not averse to wearing dresses sometimes) I still get similar treatment from proper blokes. Though I don't get beaten up in changing rooms anymore.

Despite all that, I have almost certainly been a dick to women without even realising it. We are conditioned by society to see them as lesser, as decorative, as either mothers or whores. This is not a healthy state of affairs. We are bombarded on all sides with movies, books and songs where the stalker eventually gets the girl. She said no, don't stand on her lawn playing Peter Gabriel on your wet boom box you creepy dickhead, move on to one that does like you.

Conditioning happens on both sides, and neither version is healthy. Girls are brought up to not seem easy, not be tarts, not take control of their own sexuality. While blokes are encouraged to sow their wild oats, set out on a quest, drag them back to the cave by their hair, faint heart never won fair maiden, etc. etc. Having been brought up to respect their decisions, my teenage self walked away from girls who said no. Feeling like a right-on progressive 90s dude. Occasionally, a few nights later the same girls would ask me why I had left them alone, and that they didn't mean no, they just didn't want to seem easy. A different type of bloke could easily have taken this to mean that no doesn't always mean no. I didn't want to take the risk thanks, so I kept leaving them alone. Regrets, I've had a few...

This is not putting the blame on the girls, the anti-teases, the exact opposite of the ones that kept saying yes right up until they said no. Who I also left alone, and walked away from (and on one memorably friend-zoned night, sat next to, stroked the hair of and read Shelley to). They are completely within their rights to act so. I changed my mind on enough occasions and could happily walk away without being grabbed and made to carry on (except for that one time, and it turned out she was right). Most girls I know didn't get that choice. I genuinely do not know any women who have never been assaulted in one way or another. Up until the #MeToo hashtag started trending I assumed the scale of this shit was no secret. The surprise expressed over it was the most surprising thing about it for me.

I do not think I have ever been guilty of it, but I don't remember a lot of the 90s, I was drinking a lot, I was the lead guitar player, and I was living in the aggressively macho-culture of the 'New Lad'. This meant that we could neck pints of lager and shout 'Wahey! Look at the tits on that!' ironically. It was a pretty fucking thin veneer. I do recall once grabbing the bottom of a girl that I thought was the same girl whose bottom I had been grabbing totally consensually a few nights before only to look round and see somebody else's face. Mortified, I left before either she or her friends pulled me up for it with no more explanation than 'oops, sorry'. In retrospect I may have come off more aggressive than coward, whatever the truth of it. I'm sorry if it was you. So yeah, #MeToo and #YesAllMen I suppose.

The toxic legacy of outdated attitudes will take a long time to dissipate. I am still shocked every time a co-worker refers to an occasional tech-engineer that visits as 'that he-she thing'. More often than not it's those I would least expect it from: just because you're educated it doesn't make you enlightened. She is a woman now, and deserves to at least be referred to as such. I am more shocked though, at my own inability to stand up for her in her absence. Inside I am clearly still a twelve year old boy, scared of being called a gaylord by the rugby team if he sticks up for the girl they're calling Tucgoals (the ugly cow who gets on at Locky's stop) on the bus. I got buried in bags for that. I need to realise that isn't going to happen now, man up (fucking awful expression) and tell the dickheads to stop being dickheads. It is no longer acceptable to be a misogynistic dickhead just because you are scared of having the piss ripped out of you by the other misogynistic dickheads for not being a misogynistic dickhead. It might turn out that all of you are secret feminists and are filled with self-loathing at your behaviour.


Break your conditioning, and don't be a dick.
Posted by Dave Holwill at 11:22 No comments: