Is my cat sad because he is grieving the loss of a friend? 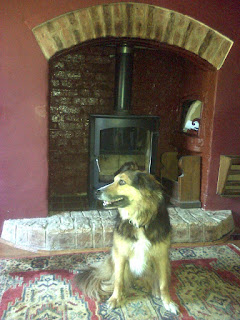 We had a tragedy in the house on Sunday morning, my beloved dog, Rizla, suffered a massive heart attack and died in my arms, just after breakfast. As my initial cry of 'Bear! No!' rang through the house, my two newest cats fled, probably assuming I was going to shout at them for eating the dog's leftover breakfast, which would be unlikely, as Rizla was more than capable of defending her food against cats. A fact that Kahlo, my one year old fluffy black and white cat should remember all too well, having found her head inside a mouthful of teeth and dog food once before, after straying too close to the bowl. She was scared and sticky, yet unharmed from the experience, Rizla was something of a pacifist, and would tell me off for hurting sticks when chopping firewood. However, as I sobbed into my dying dog's beautiful fluffy neck, knowing that I would never again experience my favourite smell of just-woken-up-dog, my only companion was the most enigmatic and underestimated member of the household. My ageing tabby cat, Duchamp, I think he may have been trying to help.

To set the scene, since we moved to this house two years ago, there has been a kind of pet armageddon going on, Duchamp is the only pet left of the seven we brought with us, and several who knew no other home are dead already. I have already made this sound worse than it really is, pets die, all the time, and when you fill your house with them like we do, it is inevitable that there are always some on the way out. See this previous post for just some of the losses we have had over the years. The current tally of the lost at this house is 1 dog, 3 cats, 2 guinea pigs, 3 chickens, at least 5 ducks (I lost count) and a fuckload of fish (I do not like fish, so that's fine). Only one of those was due to the road outside, all the rest were down to unexpected illness, or old age. 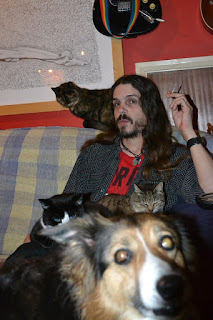 Duchamp is the only surviving pet from this picture now, and it is only three years old

Duchamp has been there through all of this (and the two cats and a dog we lost back at the old house) these have been his constant house mates, companions, friends, and in one case, his actual sister (although they never got on, it's a family tradition round here). He has seen some dark shit, and known sorrows that would make you soil yourself. For as long as I have known him, he has fled from the house at the first sign of anyone who doesn't live here. Sadly, the two young cats he now lives with think that this is normal cat behaviour, and both vacated the house over Christmas when the kids came back to visit, since they no longer actually live here (they have only been gone for about a month, and both cats lived with them for their entire lives up until then, the new cats are morons).

Uncategorically Duchamp is now the alpha cat, the top of the heap, head pet of the household, he is fifteen years old (probably, nobody can remember exactly when they got him, best guess, around the millennium) and has lived with us longer than any other pet. However, for some reason he sits back to let George Orwell, who is not even one yet, step in and steal his food (unless it is raw chicken). It might be because he is significantly smaller than the other two, much younger cats, or just because he doesn't want the top cat gig, shunning the responsibilities of command for other, more power hungry felines. He is now often to be found cuddled up with Kahlo or George Orwell, whereas he steadfastly refused to have anything to do with any Cat other than Dali (his sister) and Carty (the original top cat of the house) unless he was very cold. Possibly all this loss is making him appreciate the companions he has?

It is telling that his occasional eye infection that makes him appear to be crying came on again, just for the one day, on the day that Rizla died. Duchamp was also trying very hard to sit by me as much as he could all day, attempting to offer solace in the only way he knows, merely by allowing you to be in his presence. Or possibly, just possibly, he shared in my sorrow, and was hoping that I could offer him some comfort, after all, he had spent more time with Rizla than I had, he didn't have to go to work every day.

It is difficult to sum up this most enigmatic of my cats, he is often overlooked for his flashier, more excitable housemates, and it is easy to think of him as aloof, but he has been through some shit. I am still the only person who he will regularly sit on (despite his being a fully grown cat living with my wife and her children when I first met him 14 years ago) and if I stroke him the wrong way, move my leg slightly or, god forbid, attempt a cuddle, he will leave me as well. As a kitten, he was fed a sausage that was too hot, and taken for a walk on a skipping rope by a small girl, these betrayals, which he still feels keenly (you can ask the small girl if she has been forgiven, a decade and a half on) have led him not to trust easily, if at all.

His initial hurt at our bringing another tabby, George Orwell, into the house quickly dissipated, as it became obvious that this extroverted, over cuddly, eager to please idiot was about as far from being a replacement for him as you could get. There is none of Duchamp's quiet dignity to be found in the sprawling moron who is currently sitting on my arm, playfully hitting the delete button as I try to write this.

Duchamp sits  (always incredibly neatly, none of the sprawling uncouth lying around of the other two idiots) watching, in silent judgement of us, the only sounds he ever makes sound like a cat being loudly murdered very far away, as if he is a ventriloquist, and you'll only ever hear them if you are holding raw chicken that he might be about to get a bit of. Or, ironically, if he is actually in another room, and needs the door opened. He is not a creature to waste words. 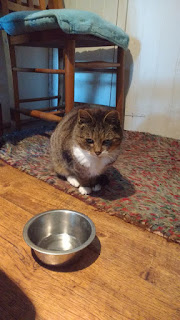 "If you're not bringing me raw chicken, you can fuck off back in the kitchen until you've got some"

As I wallowed in my misery on Sunday night, sniffing the furniture, and refusing to hoover up all the fur in the living room, I dared to suggest to Duchamp that he didn't understand. He looked at me with a look of such withering sarcasm I almost thought my father was in the room. How could I dare to suggest to this most empathic of cats that he did not know. He has been with us for all the bad times, he has watched his comrades fall alongside him, I have never known him indulge in the casual murder that his compatriots so seem to enjoy, and despite his penchant for hiding his turds in the hardest to find places (possibly because he feels he will lose gravitas if it is known that he defecates) he is very much one of us. Possibly the best of us, and like some mythical fairy, even if you have been to our house, you have probably never met him, and you probably never will.
Posted by Dave Holwill at 11:08