This is not the blog I had intended to write. I assumed that the next blog I came out with would be a thinly disguised advert for my book (Weekend Rockstars by Dave Holwill – available from amazon  very soon indeed (and aren't you sad you're not about to read 1500 words of me justifying that decision), a must-read for anyone who has ever played in a covers/functions band, or likes jokes, or books, or is paranoid that I have written them into a book – ok, not that thinly disguised was it?) 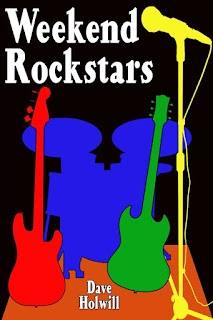 Buy my book you bastards

Since I last posted, the entire fucking world has gone completely insane – but I'm ignoring that. I've been off work for a week and a half now, and thus I am ignoring the news – and forgetting all the things that supposedly matter out in the real world. It's nice.

Anyway, I haven't written anything in a while, as I have been tickling my novel (you remember the novel right? The reason I started this blog?) into publishable shape at last (top writing tip this year, don't do a course in grammar and proof-reading at the same time as putting the finishing touches to a book that you think you've already finished – you will end up dicking around with commas, n-rules and semi-colons forever – and don't start me on oxford commas).

This is not even the blog about pets that I was expecting to write next, having not written any rib-ticklingly amusing tales from Hatherleigh zoo for a bit either, I assumed that the next tale of my accumulation of pets I did not ask for would be about Richard Parker, our most recent Kitten acquisition. But – the events of the last week have changed all that and turned our lives and house upside down. 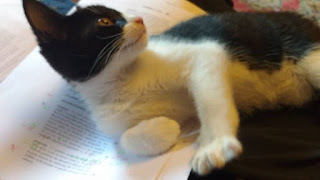 Tiny Kitten doesn't get her own blog yet

A week ago, I was dancing around outside the Tempest on Brighton beach, having a lovely time and hoping the cats were ok at home. We saw a couple of dogs playing on the beach while we were there, and idly thought about having a look for one when we got back. I remembered my last attempt to get a rescue dog, when a very snotty woman told me that as we had full time jobs – we could not look after a dog. Even though I came back every lunchtime anyway, and – at the time – the kids were back from school by 4 o'clock so the dog would never be on its own for longer than a couple of hours. Apparently, teenagers don't count as company for a dog. I must apologise to all the people whose dogs I looked after when I was fifteen – your dogs had substandard (and clearly illegal) care.

So when we rang Dartmoor View Dog Rescue on Wednesday afternoon, I did not have particularly high hopes for getting a dog, and certainly not at any time soon. We had already rung the blue cross in Tiverton, who told us we had to look at the website – and that not all the dogs on the website were in Tiverton, or even the South-West – and that the adoption process was far too complicated – and they seemed surprised that we were using something as antiquated as a phone to ask about dogs. All we wanted to do was go to a kennels, look at the dogs and say 'oooh! I want that one!' but apparently you can't do that anymore – you have to go on plentyofdogs.com instead:-

Hi, my name is Rover, I like long walks, tennis balls, and having my nipples rubbed - click like on my profile to see my 'special' photos for 'special' friends.

Hi Rover, I'm Dave, I'm looking for a new best friend, do you moult much? Do you chase sheep? Can you put up with cats and heavy metal music?

I'm not sure Dave, can you put up with a wet nose shoved inappropriately up your dressing gown every morning, warm piss on your favourite cushion and the odd poo in your flip-flop?

*turns off laptop, walks away*

But ring Dartmoor View Dog Rescue we did (they also don't have a 'showroom' as such) and they told us they only had one dog at the moment. An Alaskan Malamute:

'What the hell is an Alaskan Malamute?' we said;

Luckily, Netty was on the phone, not me, so she enquired about it more sensibly. They told us that Sky (for that is the name of the Doggy in question) would come and visit us at the weekend. I may have become over-excited and passed out at that point.

So I spent Saturday rebuilding the fence that came down (it wasn't meant to, but my nephews came over, and we – ok, mostly me – all got a bit overexcited shaking it around) when I had my studio rebuilt at the end of the garden and then I even painted it (really badly, I call it post-apocalyptic grey/green). We got the call saying that she was coming at midday on Sunday. Given the way things seem to be going, we assumed that there would be a visit, and then they would take her away again (if she even came with them on the first house check) and do loads of checks and suchlike, and then a few more visits before we might, possibly, maybe get to keep her. I went to sleep on Saturday night filled with anticipation and worry – it was a bit like just after we had moved to Devon, and my mum kept arranging for me to meet new kids (I was only five, ok? It's normal). The feeling that you might meet your new best friend the next day was one I had forgotten entirely, and was not entirely welcome back. What if she didn't like me? What if I didn't like her? What if she voted tory? Or looked around to check there weren't any BAME people around before telling a joke?

Sunday morning began with a show of solidarity from the pets. Our most recent acquisition, Gauguin (a big wonky-eared Rabbit), had kicked his way out of the cage. We assumed that the Cats would have ripped him to shreds, but no, we found Richard Parker (a female cat, but I'd got used to calling her that by the time we figured it out, so she identifies as male, though likes female pronouns – it's complicated) playing under the outdoor tables with him. While George Orwell, Kahlo and Duchamp watched relatively disinterestedly from the benches. They had followed the cardinal house rule – we don't eat family. I didn't think the cats had ever listened to that, but apparently they have been paying attention. 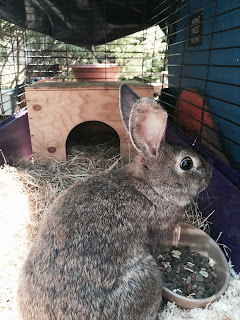 And then the lovely man from Dartmoor View Dog Rescue turned up. He looked at the garden, went through a load of paperwork, talked to us about rehoming dogs – I began to worry that maybe my new best friend had decided to stand me up, and wasn't even coming today – and then he asked if we would like to meet her now. Of course we did, and out of the van she came, huge, fluffy and beautiful. She sat in the garden with us, and within minutes we had a carpet of white fur underfoot, this is a moulty dog. I didn't care about the fur. Richard Parker looked down at her from the shelf in the summerhouse and gave a hiss or two. Sky backed off. We took Sky inside, where Duchamp hissed at her from the sofa. Sky backed off. So far so good – we don't eat family. Though George Orwell and Kahlo had legged it in case nobody had told Sky that yet. 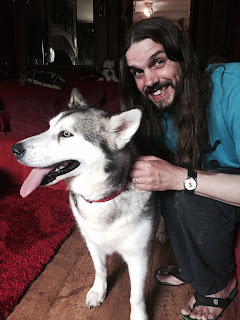 We talked some more, leaving Sky to obsessively watch the now-a-little-less-likely-to-kick-his-way-out-of-the-cage Gauguin and Picasso (Gauguin's Guinea Pig friend), and after an hour or so of Ian from Dartmoor View Dog Rescue listening to me go on about all the dogs I have had, and looking at pictures of Rizla, Rambo, Max, Bertie, Jess, Sandy and all the other dogs I have been lucky enough to be associated with over the years, he said she could stay. Just like that, no more visits, no trouble, just sign a bit of paper, donate some money to the Dog Rescue charity, and thank you very much.

I wasn't really expecting that, I had plans for this week, not just trying to tame a wolf that has never really been trained and barely knows her own name.

I can change my plans.

I would not give into any howling dogs in the middle of the night like I did with Rambo and Rizla.

Somehow I woke up on the sofa at 5am on monday morning with 4 cats using me as a barricade against the massive, snoring dog – who started howling again as soon as I snuck upstairs to bed.

Currently, Richard Parker spends her time trying to ride Sky like a horse (she copes with this very well) George Orwell is impressing upon her the importance of remembering that he is in charge (he is currently leaving a little poo in every spot in the garden that Sky has had a wee) while Kahlo is in shock that I can have done this to her, refusing to come in the house (she once did this for 2 weeks over a squeaky catflap, she'll be fine – the fluffy diva) and Duchamp – in his new, badass top-cat role – is giving exactly no fucks, and hissing the dog out of his way whenever he needs to.

So far Sky is stubborn, unwieldy, a little out of shape and prone to outbursts of unexpected malice-free excitement, she'll fit in just fine round here – and we don't eat family. 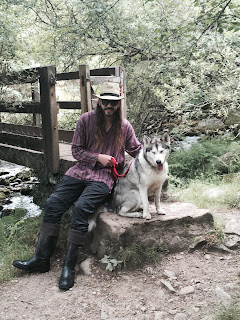 Too stupid to ever be allowed off the lead