I’ve written a lot of stuff about fathers and sons over the years - it’s the central theme of my most recent novel Gap Years - and I don’t think any of my books fail to mention that defining moment in life when you realise your father is not an all-powerful, omniscient creature.

Sorry Dad (if you’re reading) no idea why I keep harping on about it. Love you, and you are an all-powerful, omniscient creature as far as I’m concerned.

This week I experienced the other side of the equation for the first time.

I am only 42 years old and already becoming obsolete. 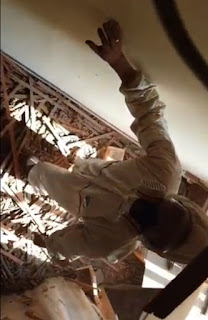 Record scratch - 'That's me, I guess you're wondering how I got here'

Without going into details, our bedroom ceiling desperately needed replastering and I am by no means a practical man. Despite this we reasoned we could save a few quid by pulling the old ceiling down ourselves - a decision both of us have since come to regret. It seemed a no-brainer to ask my firefighter stepson to help since he is both younger and fitter than me.

My initial misgivings were obvious. Despite the fact he has plenty of experience ripping out old plaster and lathe ceilings, as far as I know he has never before had to do it slowly, carefully and without anything being on fire. However, he and his girlfriend turned up, suited up and got stuck in with the crowbars.

Within not very much time at all, it became apparent he knew what he was doing a lot more than I did and I quickly deferred to him on most decisions that needed making (one of which should have been obvious, and had been pointed out to me for days by proper builder people before we began).

And then there was a lot of loft work, perching precariously on beams that clearly weren’t fit for purpose when they were put there over a century ago (which is probably why I need a new ceiling in the first place). My vertigo has led to me getting Adam to do stuff for me plenty of times before, but usually I point him at a thing then tell him what to do and how to do it. This time the situation quickly became reversed as it became apparent he knew how to get insulation out from underneath beams without ripping it to shreds or getting it in his eyes.

A more traditional, manlier man than I would have felt threatened.

Especially when he told me to stop if I was too hot and vertigo-ish.

If we were lions he would have taken me out back to a quiet bit of Serengeti and ripped my throat out before taking the pride for himself. 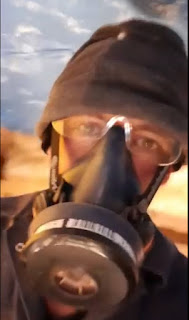 Look at the murder in his eyes - my days are limited

Luckily we are not lions, and I have never had any pride.

This is the first time he has been better than me at something I needed to do that isn’t going up a ladder. It didn’t take him long to be better than me at skate-boarding and putting out fires, but that never really mattered. This one felt important. I sat in the garden that night, looking up at the stars and contemplating my mortality.

The wheel of time keeps on turning, and nothing lasts forever. Not me, not you, not even Keith Richards. For sure as Windows 10 made us forget all about XP (what happened to 9? How bad was it?), One Direction made us forget all about the Beatles, new Melissa McCarthy Ghostbusters made us wonder who this Bill Murray guy is and Dan Brown eclipsed Dickens we will all be replaced by newer, more modern versions of ourselves that we - mistakenly - think are not as good right up until the moment it becomes glaringly obvious we are wrong.
Posted by Dave Holwill at 00:14