The Mysterious Allure Of The Cover Band

I’ve taken another fictional dive into the murky world of cover bands with my new book, Weekend Rockstars 2: The Ballad Of Fat Labrador, which comes out today. Why do I continue to write about this strange niche group? The slightly less embarrassing alternative to Civil War re-enactment societies? (It’s a fair comparison, they’re both pretending to be something they’re not, and go all wistful if you mention New Model Army). Honestly, it’s because – however uncool they may seem, however tragic and mid-life crisis related – I love them, and not just because they have paid for a substantial chunk of my mortgage over the years.

I have spent most of my musical career playing in covers bands – much to the horror of many of my much cooler friends. But while they kept their integrity (by endlessly travelling from one end of the country to the other for no money and apathetic audiences) I had a good time and got paid with minimal effort.


This link takes you to a Facebook video that won't embed
This whole thing would look much neater if it did
Sorry if you don't like Facebook videos
There’s no footage of my very early cover bands that isn’t on a VHS tape somebody else owns
But the rhythm section from my first band are in this clip of Jealousy and the Cat
doing Ozzy Osborne songs in Westward Ho! last year
If you listen very carefully you’ll notice I don’t remember the riff
that leads in to the chorus until the very last verse


I won’t deny that anybody who plays pop music has wanted to be a star at some point. Maybe only fleetingly, but they have. Who wouldn’t want to be up on a stage with thousands of adoring fans hanging on your every word? That’s certainly why Alice and Becky, from The Ballad Of Fat Labrador, got into it – however much they deny it.

If you actually intend to make a career of it, be Beyonce, have the moves like Jagger, shake it like a Stevens, it turns out you have to make sacrifices. To start with you have to work really hard, practice all the time until you can sing/play/dance better than anybody else you know – at the very least.

Then you’ve got to get out there, play every gig you can hustle up – even if it clashes with your mum’s birthday/the birth of your first child/your step-daughter’s 18th (sorry Rudi) – without false modesty. You are good, and if you don’t know it, you won’t make it (you have to believe it even if you’re terrible).

But even then, unless you already live in a city with a thriving music scene, you now have to either move to somewhere you can’t afford to live – because you’re a musician and you don’t have the commitment for the kind of career that pays enough for actual rent – or spend all your meagre earnings on travel. Sorry, AND spend all your meagre earnings on travel, because you can’t make a name for yourself only playing in walking distance of whichever mate’s sofa you’re kipping on this week.


Here’s me playing bass with the wonderful Carnivala!
We were an original band and often got to play large, well-equipped stages like this one
(sometimes they had actual audiences in front, but you can’t have everything)
Please note this is a cover version we’re doing and that’s not our fiddle player or drummer
All those gags about rotating line-ups had to come from somewhere

So that’s: working hard, working unsociable hours, driving long distance in the middle of the night/sleeping in a van, living somewhere awful, and having no money.

And then you still need luck, timing, and the stars to align in your favour when the blood gods smile upon you for that one big break.

The one big break that still doesn’t guarantee you a career.

You are very, very unlikely to make it, and the attempt to do so will probably break you.

And what if you can’t write catchy songs/don’t have a mate who writes catchy songs/aren’t really interested in songwriting?

You could try and be a sideman, or a session guy, or Bez, but all of the above still applies – especially the moving to almost-certainly-London part. If anything the competition is even harder, and the guys who have been doing it for the last fifty years are still doing it best and getting all the good gigs.


Carnivala! again, in a sweaty Torquay pub on a Sunday afternoon
Playing to the other bands on the bill and the staff
And fuck me if we aren’t doing another cover here
I was sure we wrote our own songs

But you like singing, you like playing, you don’t see the point in doing it at home on your own (you didn’t spend all that money on fuzz pedals just to upset your cat) and you have no interest in fame, fortune and an early death from sexual misadventure.

And crucially, you don’t want to do the thing you love for a living and turn it into a job.

A job you might hate every bit as much as any other.

But you may, like Alice from The Ballad Of Fat Labrador, be utterly entranced by the sound you can only get from an overdriven electric guitar in a room full of people:

“There is nothing she loves so much as the electric guitar, so magical; not its lesser sibling, the cutesy twinkling acoustic. Alice is no manic pixie dream girl picking out delicate versions of disco classics. Accept no substitute for the unstoppable electro-magnetic force of an unleashed electric guitar.
Driving home tonight angry, a little faster than she meant to, she felt the same thing: that power under your right foot as you squeeze the accelerator. The speed-freakery of it all, it’s the same feeling she gets wringing an endless distorted singing note from the neck of her guitar. Loud music, fast cars, they’re the same thing. It’s about control. It might be the same feeling that drives people to be serial killers.”

It is addictive, and more eco-friendly than all the driving and murdering that the alternatives present.

But you don’t have to be Charles Manson, you don’t even have to be a Beatle. There is no need to do all that work, there is another way.

You can play other people’s songs, get paid and get to sleep in your own bed (in the rural paradise you love) every night.

And you don’t have to do it every night if you don’t want to.

Join a cover band, there is no shame in it, no matter what the hipster pricks tell you. You get to make big exciting noises and have the mad rush of a room full of people singing along without having to fight your way through the ‘being-a-rock-star’ gauntlet first. The entry bar is amazingly low. All you have to do is be able to play an instrument to a basic (very basic in some real life cases I have witnessed) and be able to carry a tune (again, I’ve seen, walked out of, and in some cases actually been paid surprisingly good money to play with those who genuinely can’t).

Don’t get me wrong, I have played original music on stages in front of hordes of adoring fans. It’s just that they were fans of the headline act and impatient for us to fuck off out of the way.

For those like George, the hero of my first novel, Weekend Rockstars, who don’t even pick up an instrument until they are in their forties, the idea of ‘making it’ in a rock band is out of the question. But they should not be denied their endorphin rush, any more than those who don’t feel like paying a hundred quid a ticket and driving hundreds of miles to see a band should be denied the joy of a night out singing along to live music they love. Cover bands fill a need on both sides and are a very good thing and this is the hill I shall die on.

Me playing bass with the Spaced Invaders back in 2010
to a room full of drunken, dancing idiots
That massive grin on my face isn’t faked
I was having a very good time

Weekend Rockstars 2: The Ballad Of Fat Labrador is available as an ebook or paperback now 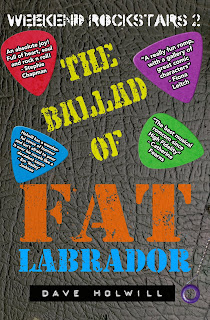 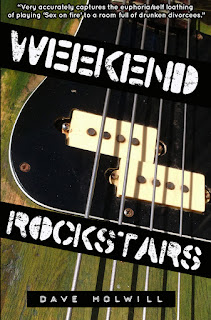