What on Earth Gives a Straight (ish) White Male the Right to Write about LGBTQ+ Pride?

I know what you’re thinking as you look at the deliberately twat-baited cover of my new book, Straight (Ish) White Male Pride (available for preorder now).

You're thinking, what gives you the right to write about the LGBTQ+ experience, Dave? 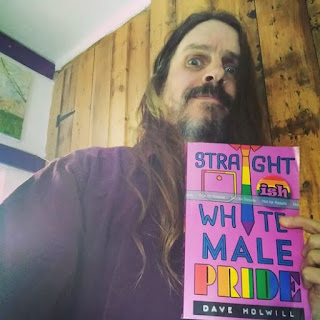 Well, the clue is in the title. I am a straight (ish) white male, and I regularly go to Pride parades. It started because I have a lot of LGBTQ+ friends and family; and became a habit when I realised how much fun they were – and the extent to which a not-very-blokey-bloke like myself actually needs them. Youdon’t have to be gay to have suffered at the hands of gay-bashers.

I came up with the idea for the book sitting outside the Fortune Of War on Brighton seafront at Pride 2018. I could see the very very straight men – terrified at the mere idea somebody might think they were gay – clinging to their girlfriends (who had dragged them along because it’s an epic party) like they might be gang-raped behind the bins if they were to let go. None of them were even that good looking. However, in a different world, that could easily have been me: it might well have been at my first Pride event. I can't remember that far back though – post-covid brain fog has got me.

I wondered what would happen if their girlfriends were separated from them, abandoning the poor fellas in the midst of the LGBTQ+ fabulousness and forcing them to make new, diverse friends. (Interestingly, LGBTQ+ events seem to be one of few instances where women sometimes feel safer than (a certain type of) men when on their own.) And what if they were the absolute epitome of the misogynistic, transphobic, homophobic right-wing nutjobs that seem to have been having such a successful resurgence of late?

So when I got home, I plotted it. And then I moved the whole thing to Devon, because there are already too many books set in Brighton. Then I put it in my Weekend Rockstars universe, added some recurring characters from other books and an unconventional narrative device stolen from Taylor Jenkins Reid, and wrote a first draft (two years later).

Then I planned my year of researching the finer details: going to Pride parades, numerous trips to discos, karaoke bars and night clubs; and a lot of time around the pubs of Exeter to get the route right and narrow down the finer details of the interiors, etc. The Spring and Summer of 2020 would contain the best research ever. And I think we all know what happened to that plan. 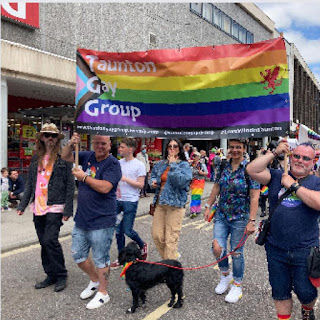 When Exeter Pride finally returned this year, I pretended to be from Taunton to join the march

So, two years after starting to write it, nearly five years since I came up with the idea, I finally have it all edited, checked, and ready to go and suddenly I feel I need to explain myself, to bare a little of my soul, perhaps. Because, you know, I am a straight (ish) white male, and why on earth would one of those want to write LGBTQ+ books? (Btw, I've always tried to represent the community in every book I've written; to the extent that an unnamed critic felt the need to point out that not everybody is LGBTQ+ and could I please put in more straight people. The answer is no. My art imitates my life, not yours and sexuality is a spectrum.)

That first draft – universally pulled to shreds by my helpful beta readers including the inimitable Drew Hubbard, who felt so strongly about it he set up Pride Reads shortly afterwards to prevent the hetero-community ever doing it again – featured my own Frankenstein’s (alright, Holwill’s) monster. My main character, Lloyd, is a public-school-educated, affluent straight white chap who has never really had to worry about anything in his life, and thus sees equality as an attack on his own personal freedoms. He is, to put it bluntly, a cunt – though he does not know it. He is also somebody I very easily could have been, given a few different decisions over the last 45 years, which is why I made him so utterly loathsome in the first draft: to draw a clear line between me and him in case anybody thought I shared his views. I had become the Bizarro-world version of those chaps glued to their girlfriends on Brighton beach.

It was a ridiculous fear, since, if that really was me, I wouldn’t have been writing this book. So I had to go deeper into Lloyd: explain why he is how he is, try to get to the root of the problem of why this particular type of person is so angry about so many tiny things that do not really affect them at all: the upbringing, the toxic masculinity, the vicious cycle of childhood bullying perpetuated despite the best efforts of the majority of educational professionals, the fear of being different (right down to the playground taunts of ‘haircut, haircut’). But I had to make it funny, so, you know, maybe not that deep. 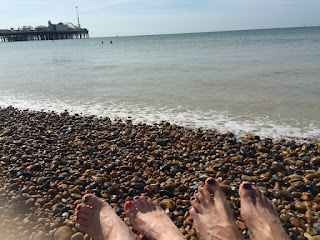 The thing is, as writers (and this is probably true for most creative types), we all wish for an ideal world where the only people who will ever read our work are people who have never met us, and god-willing, we will never have to explain ourselves to. Unfortunately this isn't possible, and most of us at one time or another will have to deal with a well-meaning aunt asking whether the things we have written about actually happened to us. The anxiety of having our nearest and dearest know we have created all these characters, and trying to work out what it means for their relationship with us, is very real and has driven me to dodge the book conversation as often as I am physically able. Because truthfully we all – without exception – think awful things. The difference between normal people and writers is that normal people can shrug it off, pretend they never thought it and hope everybody believes they're okay. Writers will think, hey, that's a really interesting idea, I should write a book around that, and have to extrapolate it into a plot, create a character capable of doing the awful thing and thus inhabit the awful thought they should never have had in the first place for far longer than is comfortable. Then laugh while explaining to the people who mean the most to them that they're not like that. They made it all up. They never even had the awful thought in the first place. Someone else told them about it; they've forgotten who it was.

So, because Lloyd could be me, and I could be him, and anybody who knows my upbringing, education and background knows it, I needed to validate him. To prove that I made different decisions, have lived a very different life and that I am – hopefully – a better person. The entire point of the book is that everybody has the potential to change their programming, to be a better person. Whether or not they decide to use it is up to them, and I won’t spoil the ending by telling you whether Lloyd does or not, just that I believe he could, if he so chose. I have to.

I gave him depth. I gave him a backstory. I scoured my very soul for the answers and that's why there's a couple of scenes that might sound like I'm writing as some kind of therapy. They're not my issues; they're Lloyd's. It's just that I had to exaggerate some of my own experiences to shape them. I'm fine, honest.

So, despite having been entangled in the scene for decades now, I have approached writing about the LGBTQ+ experience as an outsider (and as somebody who’s been in a happily comitted heterosexual marriage for the last 16 years). And that’s what gives me the right to write about it. It’s not a spotters guide (although bits of it might come off that way; I'm hoping to accidentally snag some gammony readers with my title and change their minds) and it’s not as partisan as you may expect from such a rainbow-spangled hot pink cover. But I’ve tried to help the phobic understand why Pride is still needed, and the LGBTQ+ understand a little of what makes (some of) the phobic genuinely fearful in some cases. I’d like to think both sides can take a little from this book and maybe bring a little more light to their lives.

At the very least we can have a few laughs; it’s got some very good jokes in there, if I do say so myself. His girlfriend Leanne tricked him into it with the promise of her favourite band, Fat Labrador, headlining.

And now, because she can’t take a joke, she’s had a hissy fit, run off and left him on his own – AND she’s got his car keys so he can’t even go home to London.

In order to get back to her, he’s going to have to team up with her two best friends, and they’re really not his kind of people.

For one thing, they’re at Pride by choice.

For another, they’ve got a lot of history of their own to deal with and haven’t spoken in a very long time.

Can the three of them put aside their differences and find a way to reunite Lloyd and Leanne, before it’s too late?

Over the course of a very hot weekend in Devon, the three of them are forced to swallow their pride and beg for help from each other and a diverse cast of unlikely allies in a breath-taking chase through the stifling streets of Midsummer Exeter.

Set in the Weekend Rockstars Universe, die-hard fans will be rewarded by cameos from favourite characters, and the return of Sean and Rhiannon from Straight (Ish) White Male (Previously known as Gap Years).