Weaponised Nostalgia – Or how my grandmother's toast may lead to Armageddon

There was something magical about my grandmother's toast. I'm not sure quite what benevolent spells she weaved over what was – to all intents and purposes – just a slice of burned flour and water smeared in congealed cow's milk, but it worked. She would hand slice some fresh white bread, toast it under her eye level grill, then – and I think this may have been where the magic happened – hit the crunchy top with the back of the knife to make little dents all the way around the edge. This meant that the real, thick, creamy butter that she then spread over it would ooze inside the crunchy exterior – creating the most delicious bread and butter experience in the known universe.

I have tried to recreate it myself, but to no avail. I am now the proud owner of those butter knives – handed over to me when I left home in a hailstorm of helpful kitchen items – and I can confirm that there is no magic in them. Bread is just bread, butter is just butter, a grill is just a source of heat. Maybe I need to eat it in the dining room of an unremarkable semi-detached house in walking distance of Guildford station with a glass of warm Ribena, preferably on a crisp late October morning at the beginning of half-term with a bald, cynical old man telling me the story of Sweeney Todd as he plays tug of war with his beloved Labrador?

Maybe it's not the toast. 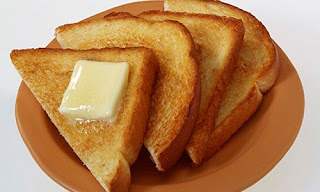 Nostalgia is a powerful weapon, the right smell, a certain song, an old TV show, a glimpse of a childhood toy, these things all create certain chemical reactions in the brain. Happy fuzzy memories of a happier time, before jobs, mortgages, children, Brexit, Trump and the ever-present threat of apocalypse. I don't think I ever felt safer than on those childhood holidays to my grandparents' houses. Either to Devon – where you could be forgiven for thinking you were in a hotel as the toast came on a toast-rack and the butter was often in sachets (my grandmother was a thrifty woman who presented me with a margarine tub filled with sachets of vinegar, mustard, ketchup and tartar sauce she had 'saved' from the Wrey Arms on our many visits there), the Ribena was substituted for Lemon Barley Water, and the old man had all his hair – with barely a touch of grey – and told you golfing stories while he watched snooker. Different, but every bit as magical, or Guildford – depending on which bit of the country we were living in at the time. Either way, Mum and Dad knew how to get themselves a bit of quality child-free time.

I come from a generation for which the most powerful of memories tend to be triggered by the TV. I recently questioned the fact that some of my most emotional reactions are for American small towns – despite having grown up in the bleak grey landscape of 1980s Guildford, and the rural idylls of Devon (if you have ever visited Bideford, you will know how much I am stretching the definition of rural idyll) either way, neither of those places bear even a passing resemblance to Kingston Falls, or Hill Valley (same town, different names fact-spotters). As the massive success of Ready Player One confirms, the films we watch as kids have a powerful place in our hearts.

Not just films but all pop culture, who among us doesn't occasionally reread a favourite book, or listen to a favourite album in the hope of glimpsing our younger selves smiling back at us? I am still so in love with the Shire that I can reread just the opening chapters of Lord of the Rings without needing to finish the book. It is like a brief weekend back in a home town that never really existed. I can be lost in happy memories of the corridors of Galactica and the rocky outcroppings of Eternia every bit as much as I can by strolling through Victoria or Stoke Parks on a sunny afternoon – more so, because they remain unchanged.

I say they have remained unchanged, but that's not entirely true. If you have ever been hit with a powerful enough nostalgia wave to watch old episodes of Thundercats, Transformers, Mask etc. etc. on Youtube, then you, like me, have probably been shocked to discover that what you remember as a perfectly crafted fantasy world of good vs evil, powerful characters and dizzying special effects (the effects have not aged well, especially not in one of my personal childhood favourites, The Box of Delights, though it has only added to its charm and I still rewatch it every Christmas) is, in fact, a thinly veiled advert for easily broken toys.

I still have no happier memory than the unbridled joy
I experienced at watching the first episode of Thundercats.

And they have stayed that way. If you spend any time at all on social media these days, you are almost certainly going to see at least one 'Like and Share if you remember this,' meme every day. They are harmless fun, images of Speak and Spells, Worzel Gummidge, Donkey Kong and Stretch Armstrong, reminding you of a simpler time. Why not like them, share them, and bring a bit of joy to your contemporaries?

Well, why not indeed. It depends entirely on how you feel about data-mining and targeted advertising, or building up fake ratings for pages that can be sold on to the highest bidder (usually some demented racist hategroup or another). If, for example, you continually like clips of 80s cartoons, arcade games, BMX bikes and Garbage Pail Kids, then it can be reasonably assumed you are somewhere in your forties, and a bit of a geek. Or, if you like pictures of sit-up-and-beg racing bikes, stuff-of-nightmares china dolls and teddy bears and Muffin the Mule then you are either racing towards your three quarters of a century, or a fucking hipster. Either way, this helps the corporations bombard you with adverts for whatever they think you should buy, and find the right cartoon to put in that advert to gently nudge you into it. No Top Cat, I don't want another mortgage you sell out bastard, and fuck you Fred Flintstone, you corporate shill. Emotional manipulation via your happiest childhood memories can never be a good thing.

This can only get worse. I confidently predict a Philip K. Dick style future in which we all access the internet directly from inside our brains via a chip – for convenience's sake. A chip which will have incorporated a feedback loop capable of accessing our fondest memories and utilising them to sell us things. A happy world where our heart's desires are transmitted straight to the people able to make them happen, where you only have to think of a thing you want and it can be yours.

A world where they can use the smell of my grandmother's toast to make me believe I want to buy a handgun and vote for a despot.