The big news this Christmas is that I finally finished the book I told myself I wasn't good enough to write. It's coming out in February with massed fanfares and another top notch blog tour care of Rachels Random Resources (doing the hard work so I don't have to). It is called Gap Years and writing it has been like pulling my own fingernails out with my teeth.

I tried to start writing this dual first person narrative after I finished Weekend Rockstars four years ago before quickly discovering it was much harder to pull together than I had first envisaged and abandoning it to write a funny story about a grandmother on a murderous rampage. Which was much easier and has done quite nicely thanks. About halfway through writing The Craft Room, however, I realised I could write the two halves separately and glue them together later. A decision I would learn to regret, but here we are, two years later at the end of the journey and on the eve of publication. 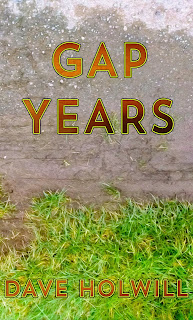 19 year old Sean hasn't seen his father since he was twelve. His mother has never really told him why. An argument with her leads to him moving to the other side of the country to live with him.

The one thing they have in common is the friendship of a girl called Rhiannon.

Over the course of one summer Sean experiences sexual awakenings from all angles, discovers the fleeting nature of friendship and learns to cope with rejection.

Meanwhile his father, Martin, struggles to reconnect with Sean while trying delicately to turn down the increasingly inappropriate advances of a girl he sees as a surrogate daughter and keep a struggling marriage alive.

Gap Years is an exploration of what it means to be a man in the 21st Century, trying to reject the social conditioning of the past and embrace a tolerant vision of the future from two very different perspectives – neatly hidden inside a funny story about bicycles, guitars and unrequited love.

If any of my beta readers are reading this and think I need to change it, do get hold of me, there is still time.

The reason it has taken so much longer to write than intended was because of the damn characters not doing what they were told. During a radio interview (with the lovely Chee off of Phonic FM) for the launch of The Craft Room what feels like a hundred years ago, I explained how Rhiannon, the female lead of the novel, had made me rewrite her completely as she turned out to be more manipulative than I originally thought. She then revealed herself to be even more complex than that, requiring at least four complete rewrites, and I began to despair of ever finishing the book.

Once I had got to grips with her, I realised I needed to cut a 30000 word subplot and replace it with something more interlocking in order to tie it all together. And even after all that there was still something wrong that I couldn't put my finger on. Off it went to my aunt, who is the best editor I know, in hopes of a reply of heaped praise, as I wanted it done, over with, out in the world. She pointed out that my ending had become a massive Deus Ex Machina after all the changes I had wrought since first committing it to .odt file. That was the thing, finally a finger had been put on it, so off I went to rewrite the ending, again. It is now the book I wanted it to be when I first imagined it on a cold morning when I was supposed to be working on my first novel – Weekend Rockstars. Well, it isn't, it's completely different, like they always are, but it works. The characters are doing what they should, and what they want to and it feels right now. I'll leave it up to the readers to decide if it was worth all the pain.

There is, however, one scene that has been a sticking point among everybody that has helped me along the way. There's no point trying to be coy about it, there is a very graphic sex scene between two men in there. Half my readers told me it was a good thing, and to leave it in, while half of them said exactly the opposite, that it was cringeworthy and awful and needed to go. I've heavily edited it to be less smutty and slightly more tasteful and it is no worse than the heterosexual sex scenes that occur later and upset nobody. I felt that representation was more important than offending any heteronormative sensibilities though, so it stayed, for better or worse.

Because representation is important. 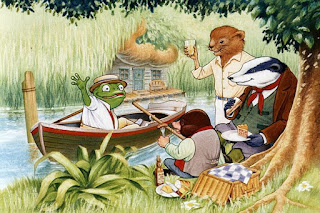 Diverse in species, but not really in character, when you get down to it

There is a lot of noise about representation these days. As a writer it is at the forefront of the zeitgeist, and there are very angry people on both sides. Go, join in on Twitter if you don't believe me. As a white, cis-gendered male, 40-something writer it is more important than ever to keep abreast of it.

At Christmas time, I am very well represented in the popular culture of the season. I am always well-represented in pop-culture, I can identify with Kay Harker from the Box of Delights, Bob Cratchett and Moley – even Arnie as he Jingles All The Way to buy Anakin Skywalker a cheap Iron Man knockoff. I may not be from their time, their country, or even their species, but they are written from a familiar perspective. I feel at home with them in their awkward, very familiar feeling worlds. I would, at this point, like to reel off a list of well-loved BAME, female-centred, gay and trans characters that I don't identify with, but thanks to the way our world is set up, I've never been forced to watch/read/listen to them and thus can't bring them to mind.

And that's the point. Had I not been able to identify with the characters in my childhood fiction, I would probably never have been inspired to create my own worlds, would not have felt so happy. I was an awkward, weird kid who felt happier in the company of fictional friends than real ones. What if I had not been able to see myself in them? What if they had all been from a completely unfamiliar world? The kids from Narnia and the Magic Faraway Tree may have been from a different time, but they felt like they could have existed in 1980s Guildford. Like the other children I met at Sunday School, in a world that was soon to disappear in a blur of technology and atheism.

And so, when creating new worlds and new civilisations, every type of people need to be visible. Gene Rodenberry knew that when he made Star Trek; Uhuru, Sulu and Chekov were ground-breaking. I don't think we're going backwards just yet, quite the opposite, but it's very easy to think the work has been done and get lazy.

Being from the background I am, I am un-uniquely unqualified to write the stories of BAME and LGBTQI communities, but that doesn't mean I can't ensure that my background characters reflect them and it doesn't mean that I can fail to deal with them entirely in my story lines. In Gap Years, the two main characters are dealing with changing attitudes in an ever more progressive world from two very different points of view. Sean, as a 19 year old, has no problems accepting all kinds of diverse and differing types of people, while his 50-something year old father, Martin, has to work harder to check his inbuilt prejudice.

I can write from the perspective of straight white men in Devon, easily, I am a straight white man in Devon. Ironically I recently read a book set in Devon that felt a lot like it had been written by someone who had never even visited, some major geographical mistakes were made, along with the kind of misunderstandings about rural public transport that can only be assumed by a city-dweller. I would feel uncomfortable writing from the perspective of a trans-woman struggling in Uganda though. Not because I find the subject matter uncomfortable, but because it is not my experience. I can empathise, I can try to understand, but I can't really write that story. It doesn't mean that my straight, white Devon men can't encounter a Ugandan trans-woman in their travels (spoiler: they don't) and my background cast is as diverse as the story (and my as yet undiscovered built in privelige and prejudice) allows.

It certainly doesn't mean that I can't write a couple of gay scenes and trans characters. But it does mean that I need to run it past my friends and relatives with real world experience to make sure it reflects the realities of their life – which I very much did. The most important thing to do as a writer (and we all know this) is to do the research, make sure it will ring true, not only does it make you a better writer, but it also makes you a more sympathetic human being, and that can only be a good thing.